Here you will find a selection of some of our previous achievements. Be inspired: take a look at our portfolio.

Patio Replacement Manafon, Powys
Another patio which was badly in need of replacing completed by our team. The existing patio was literaly crumbling and was also running towards the house which meant that any rain run off would end up against the house which would potentialy cause damp problems. We removed the paving to find that the slabs were laid on five small blops of mortar which explained why most of the paving had broke and uneaven. This is not the correct way to lay paving! It was also found that there was less than 35mm of stone laid underneath which meant the patio was very uneaven as the ground is mainly clay. We removed the existing stone and approx 12 tonnes of clay before bringing in nearly 10 tonnes of scalpings at a depth of 100mm compacted to create a solid base for the new patio. All the new paving was then laid on a full bed of wet mortar to ensure that the patio stays solid for many, many years to come as we would do with all of our patios. We also replaced two small entrance paving areas and laid 50 square meters of turf. The gravel was recycled on the driveway. The end product turned out very well and the customer was very pleased and have already booked us in for the next project!

As part of a new build development in Llanidloes we erected all of the fencing, laid all lawns, planted trees and shrubs for all of the 30 houses.

We were called in by South Shropshire Housing Association to clear the garden of one of their property’s.

The garden had been untouched for over seven years so was completely overgrown. With a lot of hard work we managed to return the large garden to a neat and manageable place for the tenants to enjoy.﻿ 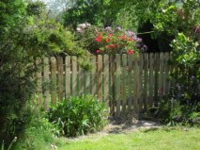 During late summer of 2011 the Abermule shop was completely renovated.

We were called in to tidy up the outside of the shop which involved removing ivy that had completely taken over the side wall which was three foot thick in places! Now removed it has made the property look a lot neater and has reduced potental damage caused by the ivy.

The client requested a fence to be built to allow their two dogs to play in the garden without the worry of them running into the road. They also needed the property to be secure as their oil tank was in plain sight and being in a quiet rural area security was an issue.

A secure feather edge fence and intigrated gate was built to solve the issues that the client had.

Now they feel a lot more at ease with their dog in the garden and the general security of their property.

Following a successful makeover of the clients rear garden in 2010 our clients had no hesitation in requesting us to take on the task of replacing their dying conifer hedge with a new garden wall.

Our clients neighbours also wanted us to replace their hedge with the same type of wall.

The conifer trees were cut down and stumps removed and replaced by the walls as seen below.

A low wall was built on the two coustomers boundary with wooden fence pannels fixed inbetween the brick pillars to give an attractive aperance, whilst giving maximum privacy and low maintenance.

The customer required a new pannel fence to replace an existing fence that was missing a few pannels and was rotten and unsecure. There was also a conifer hedge running along side of the fence that had suffered greatly over the last couple of winters without recovery. This hedge was past helping so it was completely removed.

A new three foot high pannel fence was erected to replace the above. This has now left the coustomer with a maintenance free fence and no need to trim the hedge several times a year.

Andrew demolished the stone wall on the front of our property which had partially collapsed.
He then rebuilt the wall with 9" concrete blocks. At the rear of the back of the bungalow he repaired the concrete steps going to my oil tank. Both jobs were very well done and we are very pleased with the work. He is a very nice person and extremely hard working and would recommend him to anyone. We look forward to using him again in the near future.

Many Thanks Andrew for a job well done
Derek Trow

This factory unit is situated on the Dyffryn industrial estate in Newtown,
Powys.

We were called in to clear up the unit that had been unoccupied for some
time. Recommended by a previous satisfied customer where we carried out similar work, they were happy for us to start as soon as possible.

As you can see from the 'before' pictures below there was a lot of work to
do to bring it to a manageable state, but after a lot of hard work and many
trailer loads of waste later we brought it back to a much more presentable
state.

Constructed in the early summer of 2010 we transformed this plain un-practical rear garden into somewhare that could be enjoyed throughout the year.

The sloped lawn area was hard work to maintain so the idea of terracin the garden came about. As you can see in the photos a new retaining wall was built further back than the original giving us two flat levels to work with.

At the lower level we constructed a large patio area to replace the old concreted area. New steps were built into the retaining wall which give access to the upper level. Golden flint gravel has replaced the lawn area, a circular patio to the left of the garden and a new shed base and fence was also constructed.

The clients are very happy with their new maintenance free garden and now see it more as an extention to their home rather than another chore to do at the weekends.

More photos of this project

This is one of many gardens landscaped for a local developer on a new housing development in Newtown.

We created this raised vegetable plot for a customer who wanted to become a little more self sufficient. Due to the lack of & poor quality top soil in their garden this large raised bed was the best solution. 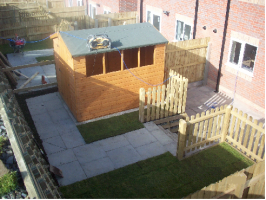 As part of a complete new garden on a new housing development a shed base was required. The base was constructed using plain paving slabs as shed covers most of the base area. We also put the shed together, layed pathway & steps, turfing and all of the fencing.

To arrange your quotation please call

or email us at

A picture tells a thousand words. Explore our diverse portfolio.